Be Satisfied with what you have ... 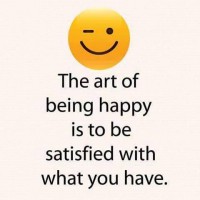 A young yogi lived by the side of a river. His life was simple and carefree; he practiced yoga almost all day long. Because he had no other responsibilities, he had plenty of time to sit peacefully with closed eyes, his thoughts fixed on the Lord within his heart. This was his daily meditation.

One day, after bathing in the river, he washed his only piece of cloth and laid it out on the rocky bank. While waiting for it to dry, a thought crossed his mind, "I am wasting time waiting for this. If I had another piece of cloth I could get dressed right away."

Just then an old sadhu (a wise man) passed by. This sadhu was able to read the thoughts of others. He stopped and spoke to the young yogi. "My dear son, I know what is on your mind. You want to save time. But rather than collecting more and more possessions, it's better to be happy with what you have." He then offered the yogi his blessings and continued on his way.

The young yogi pondered the sadhu's advice, but decided that just one extra cloth was not too much to desire. So he went to the marketplace and bought one.

The next day he bathed in the river as usual, washed his cloth and put it on the rock to dry. Then he put on his nice new cloth and went to perform his meditation.

Later in the day, when he came back, he discovered that a hungry mouse had nibbled holes in his old cloth. At first he was dismayed, but then thought, "I know! I'll get a cat to chase away mice."

He went to the market once again and bought a cat.

He spent the next day very happily and peacefully meditating. But, as evening approached, the cat began to miaow, disturbing the yogi.

"Oh, he needs milk," he groaned. And so he reluctantly left for the market again, returning this time with a cow.

The next day was peaceful until the evening when the cow began to moo. "I'm not going to milk it everyday!" thought the yogi. "It takes too much time."

So he went to a village and asked a young woman to be his wife. She could get milk from the cow to give to the cat, who would keep the mouse away from the yogi's cloth.

And so the yogi was happy - for a while.

One evening his wife complained, "I'm sick of you just meditating all day. I want a home."

So the yogi built a house.

But then his wife was lonely and wanted children...

As time went by the yogi meditated less and less... and worried more and more. He was constantly busy looking after his house, his growing family and the animals. Sometimes, when he had a quiet moment, he would reflect on those carefree times when all he had was a single cloth.

One day he was thinking like this when the old sadhu again passed by. The sadhu smiled and remarked, "I can see you are in a pensive mood, so I will tell you again that it's better to be happy with what you have. Because when it comes to wanting things, there is no end."

Enter your area name or pincode